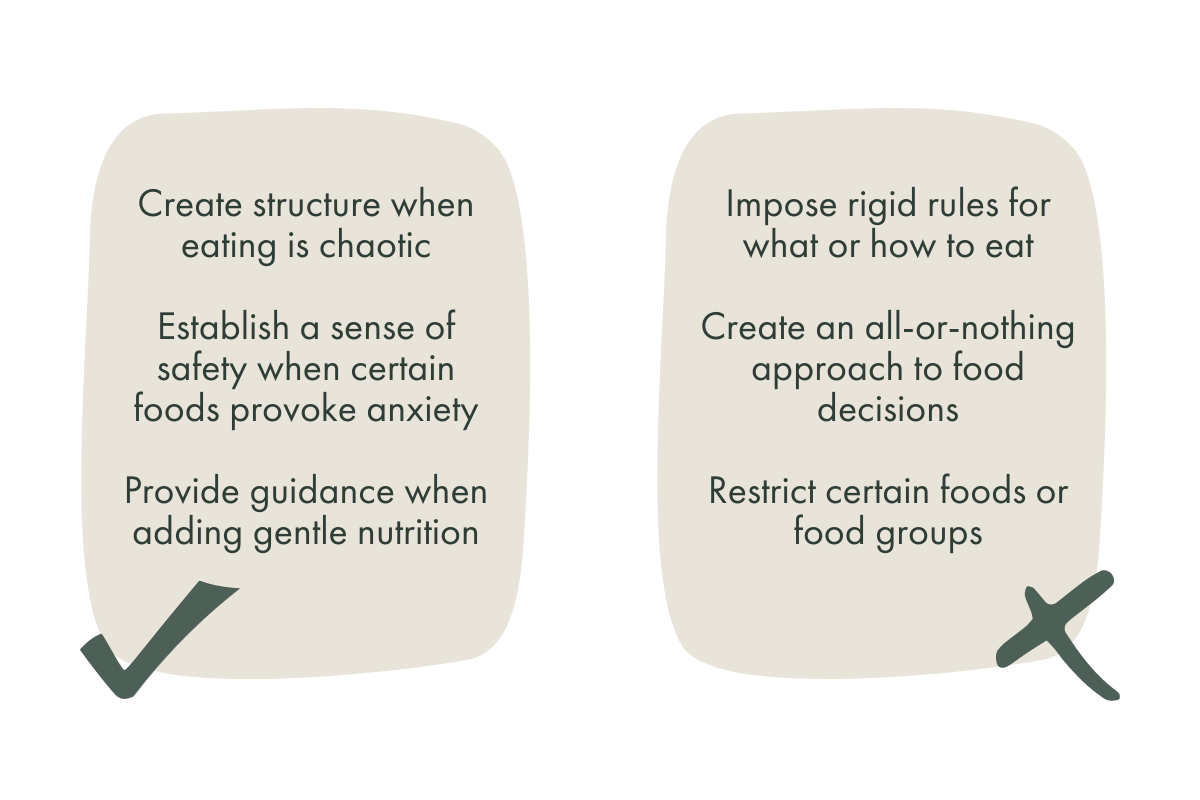 How do I know what intuitive eating meal plan is right for me?

Before you design your own, it may be helpful to learn how other intuitive eaters have been helped by their own intuitive eating meal plan. Meet Janae, Denise, and Andrew*, three intuitive eating clients who all faced different eating challenges. Over time, they each learned to trust their body to tell them what, when, and how much to eat, and realized they no longer needed a meal plan to be a successful intuitive eater. 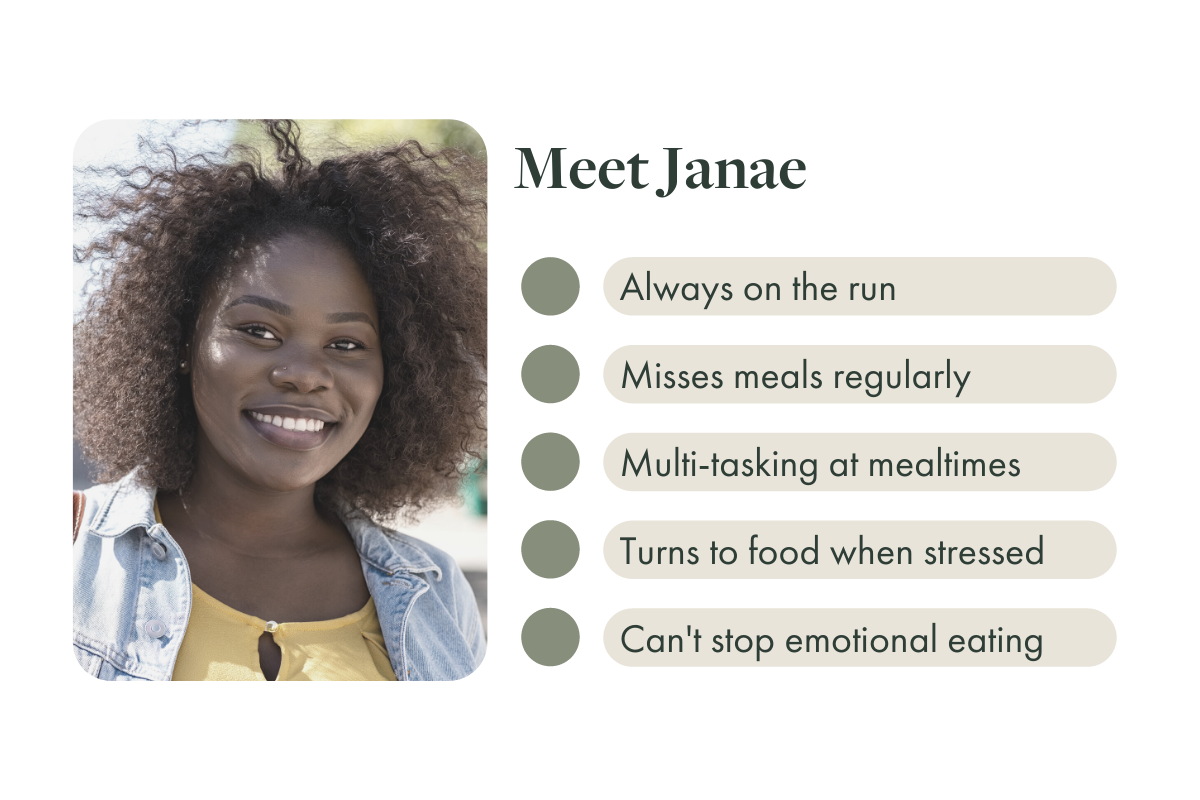 Every night, Janae snacks after dinner even though she doesn’t feel hungry. She blames her nighttime snacking on emotional eating because her job is very stressful. However, distracting herself from eating with self-care like reading or bubble baths has never seemed to work.

Because she eats past fullness every night, Janae isn’t hungry and skips breakfast in the morning. Janae’s lunch time is unpredictable because of her schedule. She used to pack lunches for herself, but found she never had time to eat them. If Janae has a second to leave her desk, she might grab something from the vending machine or from the office candy bowl. These snacks never satisfy her for long.

When Janae gets home from work she is exhausted and ravenously hungry. She makes dinner, but doesn’t feel she has time to sit and eat it. Janae eats standing in the kitchen while watching TV or scrolling on her phone. At the end of the night, when Janae finally sits down on the couch, she immediately feels that familiar call back to the pantry. And the cycle continues. 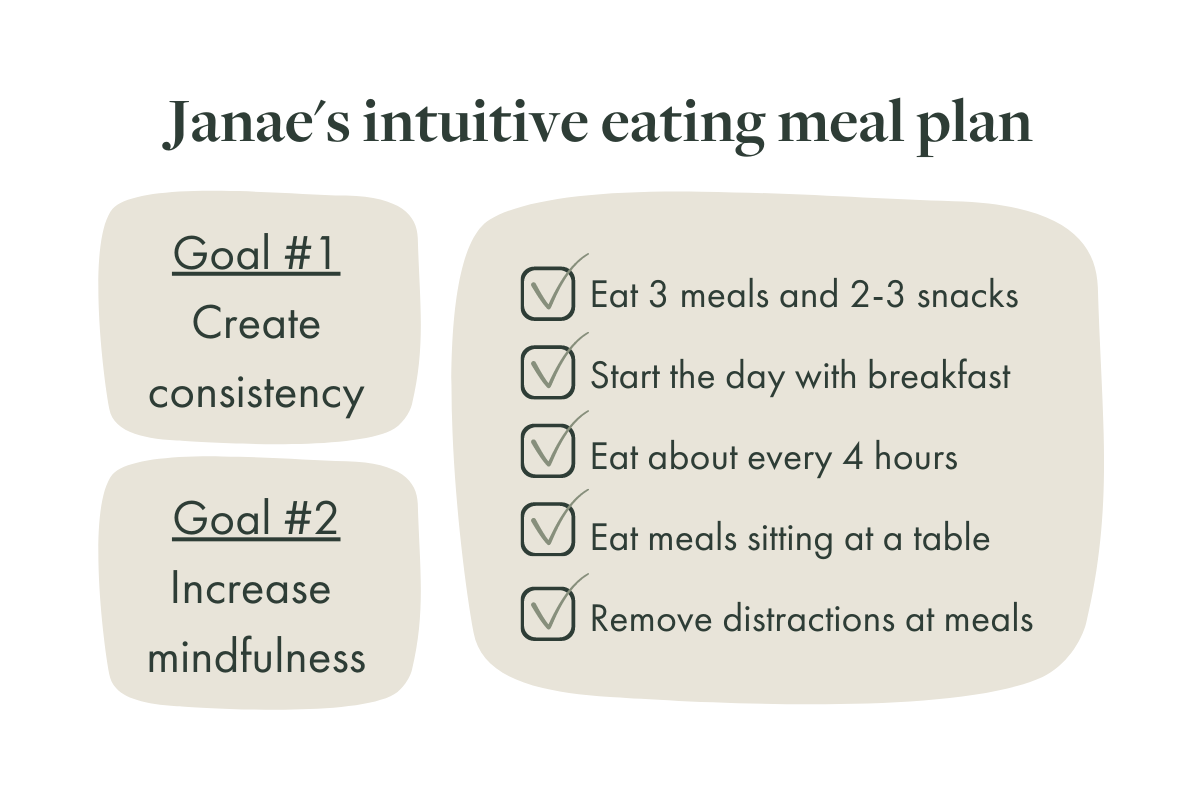 Janae’s intuitive eating meal plan is designed to create consistency and mindfulness. Eating consistently through the day means that Janae is never letting herself reach ravenous hunger. Mindful eating gives Janae an opportunity to be more present with her body’s hunger and fullness cues and derive more satisfaction from her meals.

Janae takes small steps over several months to make her eating more consistent. She learns that if she wakes up 20 minutes earlier, she has plenty of time to eat breakfast. Janae is most successful at bringing her lunch when she packs it the night before. She also learns that she has to set firm boundaries with her coworkers about her lunch break.

When Janae sits down to eat dinner, she notices how much more she enjoys the food she prepares. By 9pm, when Janae would normally sit on the couch and want a snack, she often isn’t thinking about food. Janae comes to find that when she is adequately nourished throughout the whole day, she is better able to recognize when her evening hunger is physical or emotional. Some days she still turns to food when she’s stressed, other days she decides she would be better served by calling a friend, writing in her journal, or going to bed to get some rest. 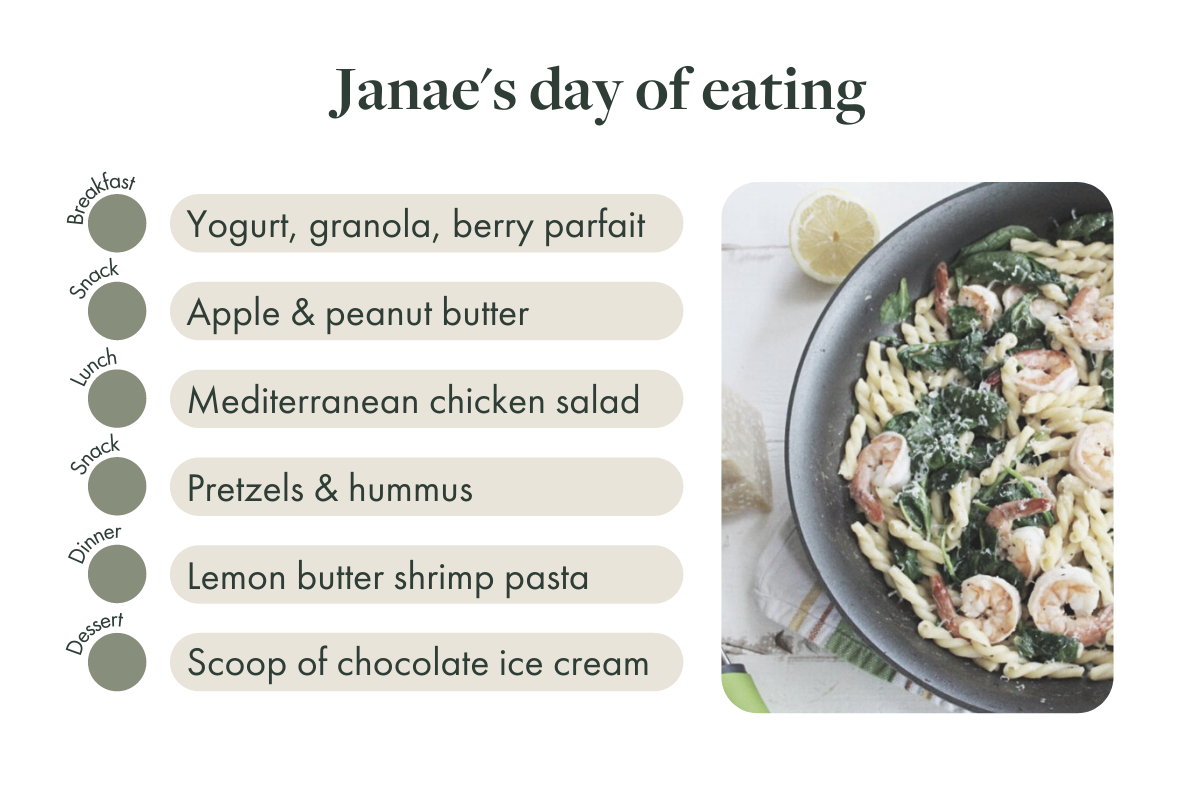 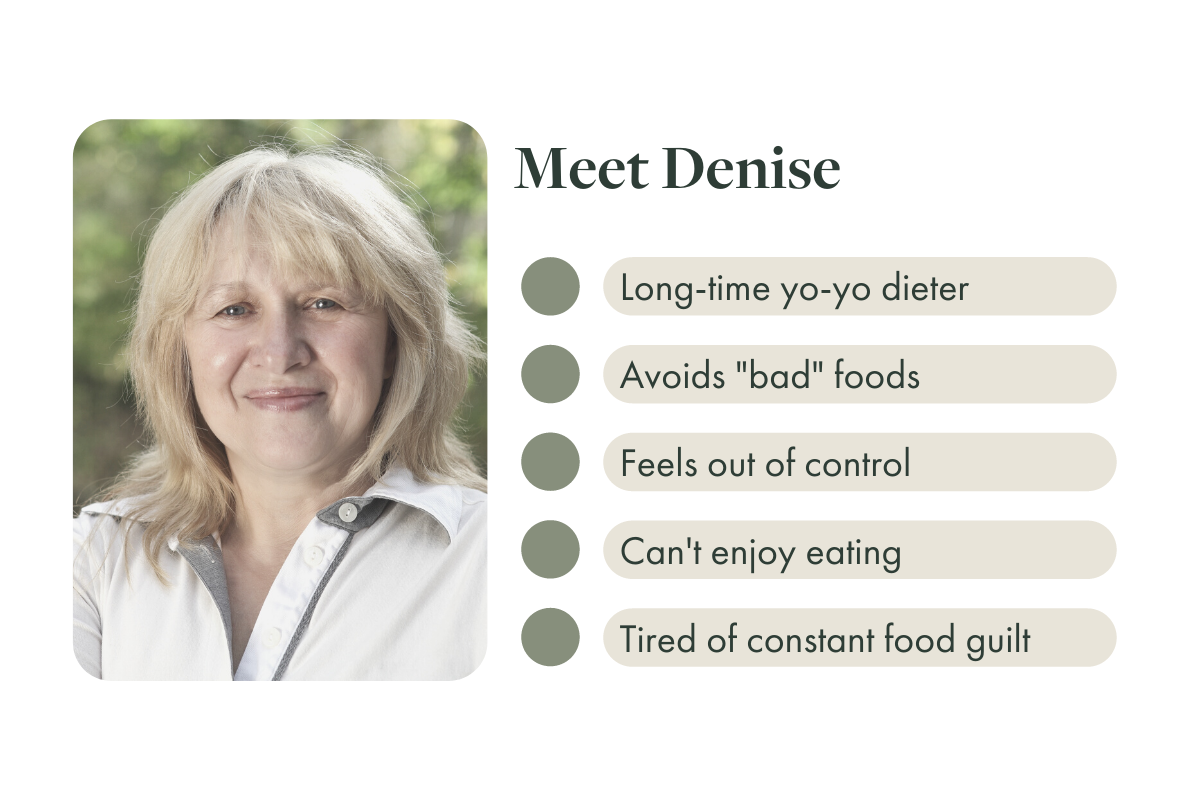 Denise is sick of dieting, she’s done it for years

Every time Denise dieted and she thought she’d lost a little weight, she ended up gaining it back, plus more. Denise blamed herself and her lack of willpower for failing her diets—that is until she found intuitive eating. For the first time in years, Denise felt hopeful that she could be free from the endless yo-yo diet cycle.

When Denise does allow herself to eat “bad” foods, she feels totally out of control around them, thus confirming her belief that she cannot trust herself to keep these foods in her home. It makes her feel guilty and ashamed. Denise will not feel peace around these foods until she works to reintroduce them into her diet. 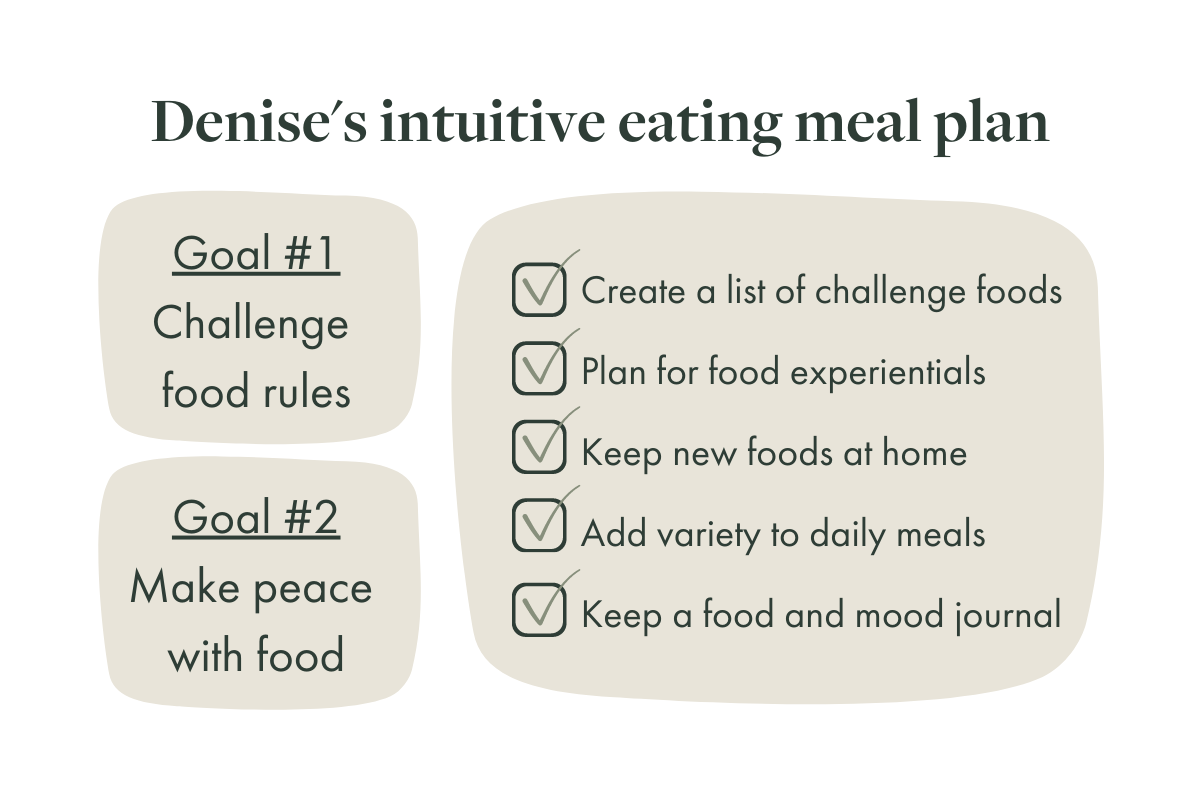 Denise’s intuitive eating meal plan is designed to help her challenge her food rules and make peace with food. Slowly and strategically challenging “bad” foods will make it easier for Denise to eat these foods over time. Creating a safe space to process her emotions around food will also help Denise achieve food peace.

Denise struggled at first with the idea of keeping carbs in her home, convinced that if she purchased them, she would eat them all right away. In fact, this is exactly what happened when she bought her first bag of potato chips. However, Denise purchased another bag of chips and followed her dietitian’s advice to incorporate them into her lunch meal and write down her thoughts as she ate. She did this for three more weeks, eating chips every day at lunch. Denise was surprised at how when she was calm and present at her meal, the chips which tasted really great at first somehow became less appealing over time.

Several weeks later she realized that she had a bag of chips in her pantry that she had forgotten about, which never used to happen. She felt compelled to eat a handful and then put the bag away. Later she realized she didn’t feel guilty at all about eating them and was able to go about the rest of her day without thinking about them. Over time, Denise’s meal plan changed in order to habituate other foods she once avoided, until she no longer needed to follow a plan and felt confident eating a variety of foods without guilt. 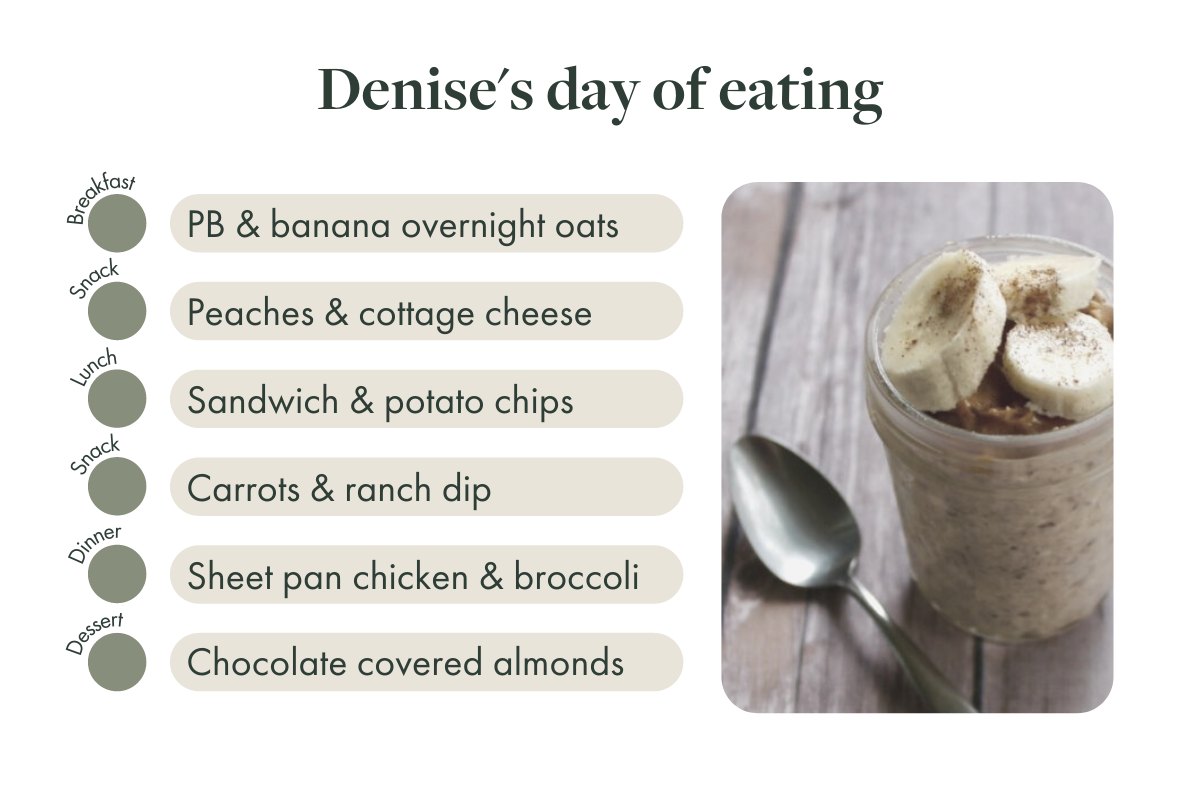 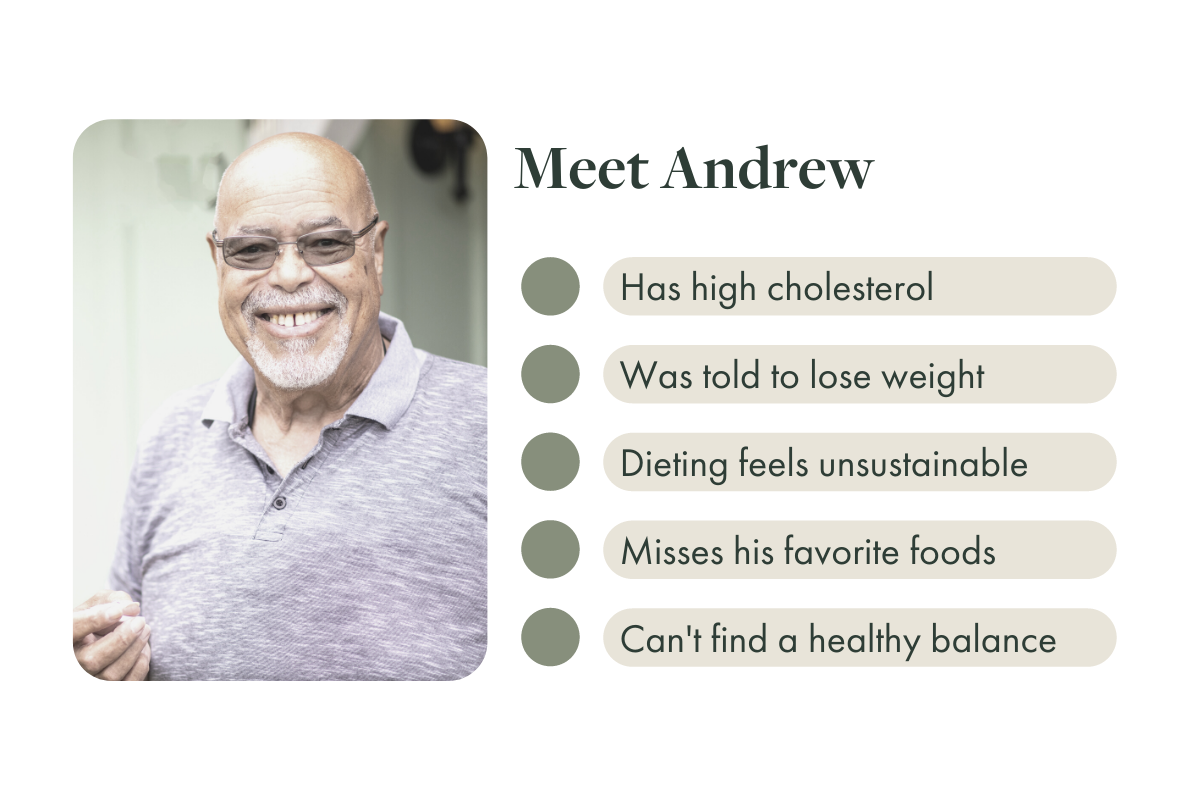 Andrew was diagnosed with high cholesterol 2 years ago

Andrew’s doctor told him that if he lost weight his cholesterol would improve. Andrew decided to try a low carb diet and was surprised at how easy weight loss was for the first few months. At his 6-month check-up, his doctor congratulated him for losing weight and told him his cholesterol numbers looked great.

However, after 6 months, Andrew’s weight loss stalled. He noticed more and more how hungry he was during the day. Andrew had a hard time sticking to his restrictive diet all week, especially on the weekends, which he eventually deemed his “cheat days.” He felt tired and moody a lot, getting feedback from his wife and kids that he wasn’t fun to be around when he was hangry.

By his 1-year check-up, Andrew stepped on the scale at his doctor’s office and saw he had gained back most of the weight he had lost. His cholesterol numbers were back to where they were a year ago. Andrew’s doctor made a big deal out of how important it was to maintain healthy habits and made him feel guilty for gaining weight.

Andrew wanted to follow the advice of his doctor to lose weight to improve his cholesterol, but his intense hunger, mood swings, and fatigue made him feel like dieting wasn’t sustainable for him. If Andrew’s doctor was more informed about Health At Every Size, she might have recommended Andrew focus less on his weight and more on healthy behaviors, and referred him to a HAES dietitian. She also wouldn’t have shamed Andrew for his weight gain or recommended Andrew stay on a diet that was making him feel miserable. Andrew didn’t know that he could address his cholesterol without fixating solely on weight loss. 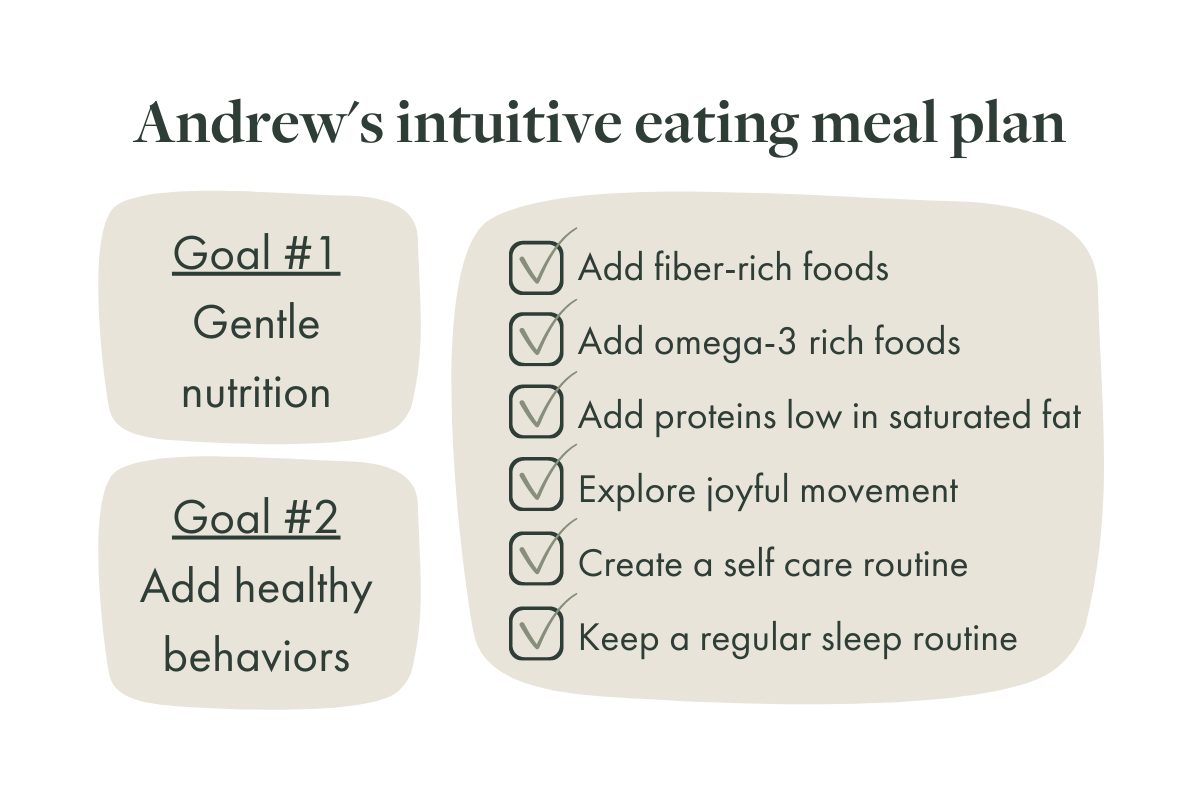 Andrew’s intuitive eating meal plan is designed to guide him as he implements gentle nutrition and adds healthy behaviors to his routine. By focusing on what he can add into his diet instead of what he has to take out, Andrew can be intentional about his food choices without being restrictive, making his diet more sustainable and enjoyable over time.

Andrew found that when he incorporated nutrient-dense foods and a balance of carbs, protein, and healthy fats he no longer felt deprived or low energy. His mood drastically improved and he no longer felt like he needed cheat days on the weekends because no foods were off-limits.

Because Andrew didn’t feel immense pressure to exercise for the sole purpose of weight loss, he felt free to explore movement that he truly enjoyed. He learned that he had fun riding bikes with his kids on the weekends and taking walks with his dog after dinner during the week. When Andrew went back to the doctor 6 months later, he was surprised to see that his cholesterol improved even though his weight stayed mostly the same. He ultimately decided to find a new doctor who treated him with respect and didn’t shame him for his weight. 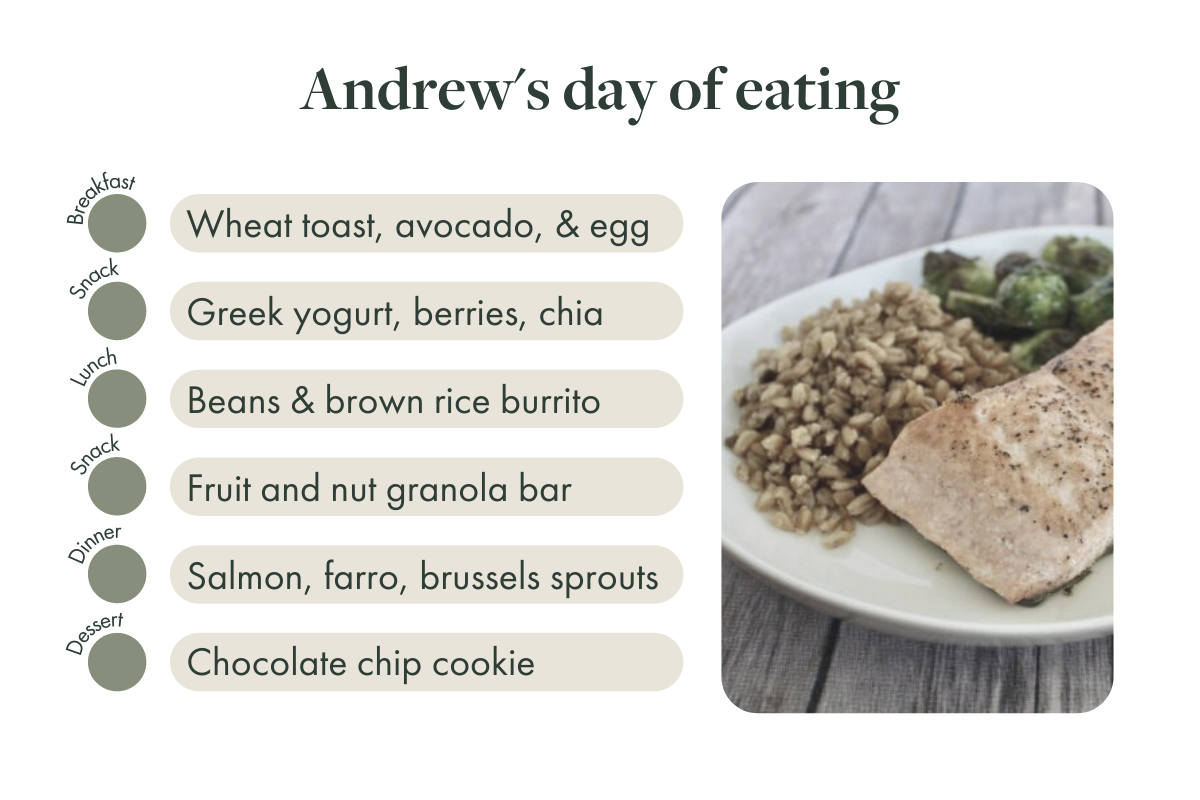 Ready to create your own intuitive eating meal plan?

Each intuitive eating meal plan is unique. As you work through the intuitive eating principles, you may become more aware of specific challenges you have around food. It’s good practice to start with a meal plan that incorporates consistency, adequacy, balance, and variety. Working with a dietitian who specializes in intuitive eating can help you further tailor your plan to help you reach your nutrition goals.

Having a structured meal plan that incorporates consistency, adequacy, balance, and variety can help you reach your intuitive eating goals and make peace with food. Ready to create your own meal plan? Download your own meal planning worksheet here to get started today! 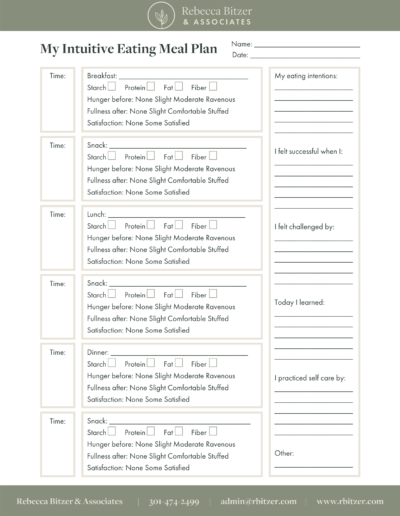 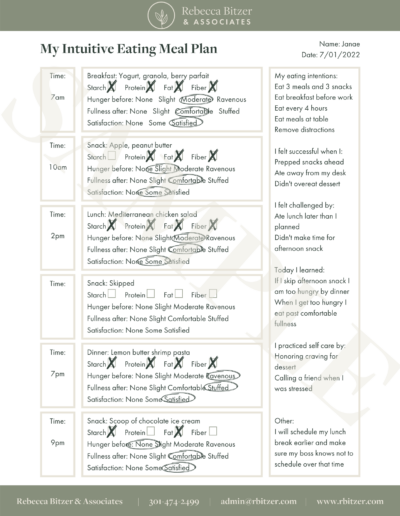 Kristin Jenkins, MS, RD is a Registered Dietitian Nutritionist. Kristin specializes in eating disorders and intuitive eating, and is an advocate for weight-inclusive care for all her clients.